BTS of the making of the White Winter Queen Dress

January 26, 2019
After successfully completing the DIY crown for my upcoming White Winter Queen themed shoot, it was time to move on over to making the dress. The inspiration for this entire look came off of a Pinterest photo where there was a stunning model wearing a white dress that looked as if it was made out of some sort of organic mossy mesh. Instantly when I saw that dress, I knew the entire direction that I wanted to take for my WWQ look ... I wanted to circle my entire look out of bare white sticks. Thankfully, even after raiding my yard for the crown, there were still many sticks left for me to swipe for the dress.

For the base of the dress I decided that I wanted to make things as easy on myself as possible, namely because due to time constraints I only had a week to put this entire look together before my model and make up artist came over to the studio to shoot this, so ... it was off to my local thrift shop to find a dress. In my head I had a white wedding dress in mind, and thankfully, my thrift shop didn't disappoint! (It's amazing how many folks donate their old wedding dresses!) When I got to the store all I had was my models measurements and a vision in my head for the dress. It needed to be her size (or even a bit bigger). It needed to be strapless. It needed to be cheap ... easy peasy right?!?!! Well, actually, it was that easy! I only had to go to two different thrift shops before I came across a wedding dress that fit this bill. Now I will say, even at thrift shops, sometimes the managers can price wedding dresses a bit higher than I think is warranted (and I can say this with ease because I managed 3 different million dollar thrift stores back in the day for almost two years), you can very easily find them priced at around $100 which was NOT going to be an option for me. But, as fate would have it, I found a used wedding dress for only $40, which was perfect because I already knew that I was going to cut & paint that baby up like crazy! 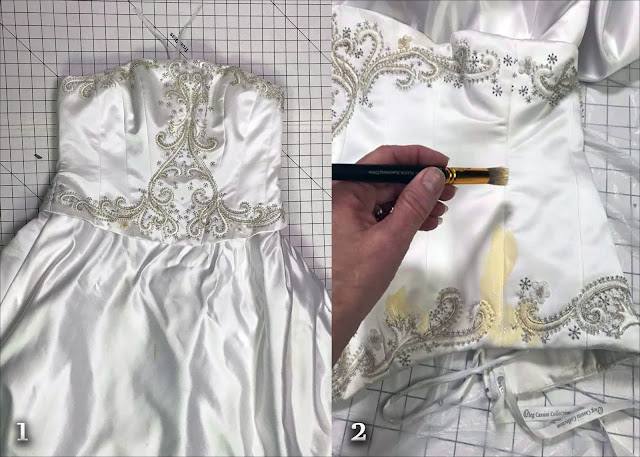 Once I got the dress home my first step (not shown) was to cut off the long lolly-pop train just so I could take the weight off of the dang thing and make it easier on myself to handle. In addition, I went up under the dress and cut out all of the attached petticoat tulle ... again, I needed to make this monster as easy to handle as I could. Once the dissection was complete, it was time to start painting the thing (#2)! Using the same 4 colors of paint that I had used for the crown (white, yellow, orange, & red) I began the task of painting the dress. My goal here was two part. Firstly, I needed to try and muck up the thing so that I could try and hide the fact that its a wedding dress. And two, I knew that if I gave the fabric underneath the sticks that I was preparing to attach to it, I'd get a little bit more shape & definition in the final photos. Again, my motto is always, shoot like you mean it, meaning I do not rely on Photoshop to "fix" my images. If I cant get everything as right as possible in the lens, then the final photo is as true as it can be. So yeah, at this stage, my dress is definitely looking quite ugly! LMAO! 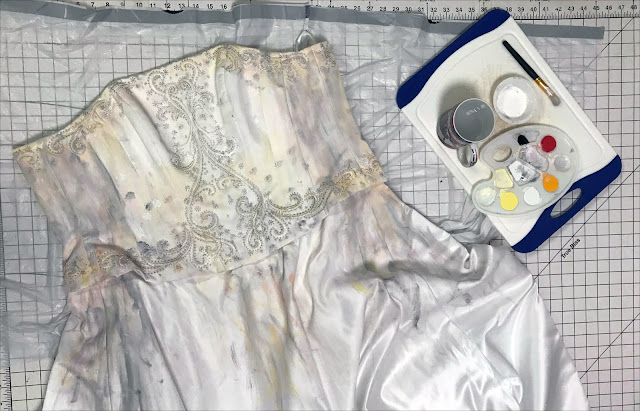 Once the paint was applied and allowed to dry over night, it was time for me to start sewing the sticks on. Unlike the crown I decided to pre-paint the sticks white as best I could. This step ending being one of my life savers because even after the sticks were all hand sewn on, there was still some follow painting that needed to be done, and let me tell ya ... that was quite a messy endeavor! LOL! But thankfully, the dress and I survived, even with my ever faithful basset hound Han Solo eyeballing all those yummy chew sticks in the house! 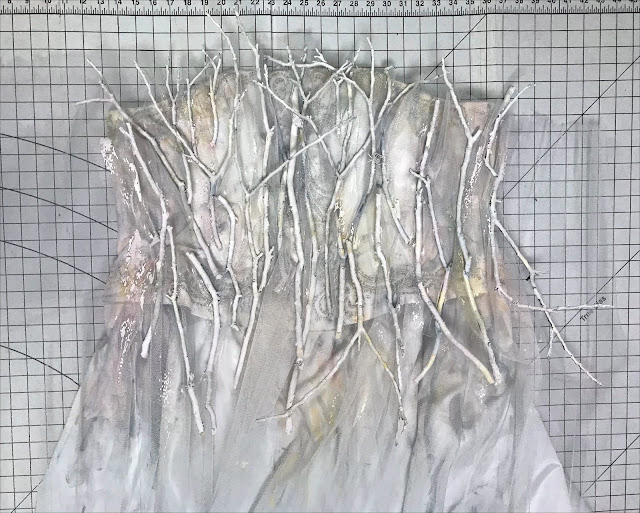 Here's a closeup side view of the dress with some side lighting to better show you all the sticks and follow up painting. As you can see, there's some netting also on the bodice. That little stroke of creativity came to me about 3 sticks into the hand sewing. I simply used some of the petticoat netting that I had whacked off of the gown earlier and used it under the placements of the sticks for some added texture as well as another way to conceal that I was using a wedding dress. 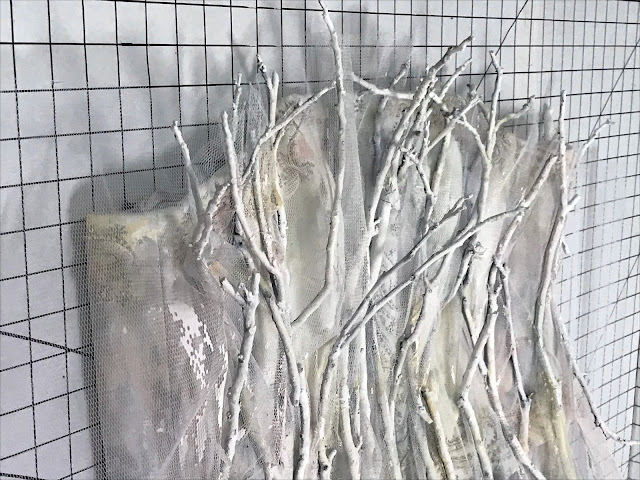 Again, my hope (or fear) is that I don't want this dress to scream "wedding gown" in the final shot, so I figured that adding a little bit of texture as well as covering up some of that embroidery work would help solve my problem. 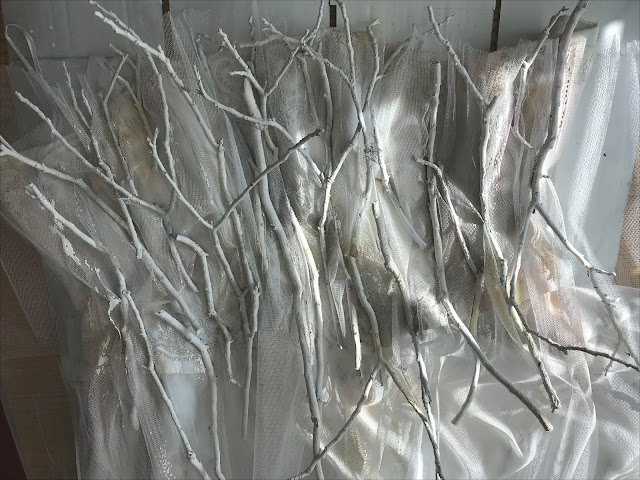 All in all, I think I'm quite happy with the finished look, but I guess we won't really know for sure how it all looks until I have the gown on my model and the studio lights on it. So until then, keep your fingers crossed and stay tuned because I still have yet to make the necklace and a backdrop that will hopefully complete the look of my White Winter Queen!

*** If you are new to my blog and didn't know, I'm also on Facebook! Follow my photography HERE to see more like this as well as the finished projects! ***
diy dress wedding dress white sticks white winter queen 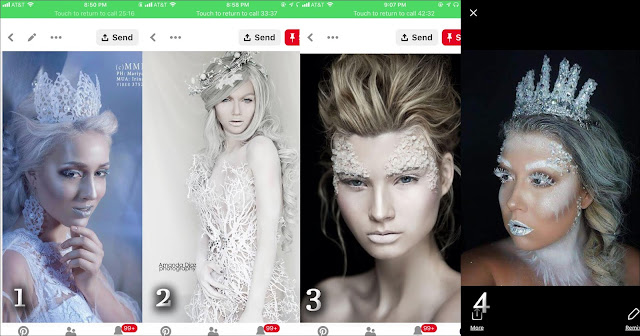 A new project .. The 4 Seasons! Here comes the Crown DIY!

As if my mind wasn't already jam packed with all kinds of projects for this year, I decided to take on an old project that's been in my head for years. Now mind you, this project of shooting all four seasons, winter, Spring, Summer, and Fall has already been shot to death, I myself have never tackled it and now seemed as good of a time as any. And, sharing the journey of these projects is something that I hope you will enjoy following as much s I enjoy documenting them.

So, with all that being said, I was of to the drawing board, or in this case, I was off to the never ending boards of Pinterest to get some inspiration. And, since this is January and we are totally submerged into wither, I thought that would be the appropriate season to start with. I've always wanted to do these themes with a flawless model, coordinated with an awesome MUA, and a killer look right in my studio. With all of that in mind, I found myself leaning towards these 4 inspirations from Pinterest ...… 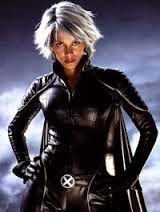 At least that's what I told my family! I told them that I am an X Man with a mutated gene! Let me explain .. A little over a week ago I went to see a new family doctor in my new city and she decided to give me a through once over. We set me up for a pap smear, mammogram, physical and topped it all off with a lengthy visit with the vampires .. just your basic checking under the hood kind of thing. Well, most all of the results have come back and for the most part I'm a vision of health, except for one thing. In one of my blood works it has come to light that I have whats known as the MTHFR gene mutation. MTHFR stands for the methylenetetrahydrofolate reductase gene (methyl-ene-tetra-hydro-folate-reductase).
I know, that's a mouth full but in my research about this mutation I have come to read that the mutation means that my body can not metabolize folic acids so all those healthy dark greens that I have been eating has been for not. This gene prohibits my body from being abl…